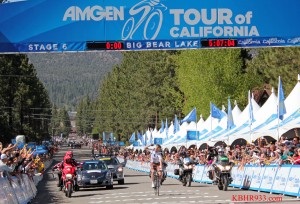 Big Bear Lake, Ca October 21, 2014 – As anticipated, the Amgen Tour of California announced that Big Bear will be a time trial stage stop on Friday May 15, 2015.   Although there have been many time trials at high altitude, what makes this event special for Big Bear Lake is that the start and finish for this stage will be in and around the Big Bear Lake Village.  Spectators will be treated to watching the best of the best pro cyclists begin then finish this stage within blocks of each other.  Individual time trials are an exciting form of racing as the last rider on the course is also the leader of the overall race.   In other words, the victor is unknown until the last cyclist crosses the finish line.  This years 8 stage tour begins in Sacramento on Sunday May, 8th and ends with a race from LA Live to Pasadena on Sunday, May 17.

Several roads in Big Bear will be affected during the Friday race but event promoters have lessen the impact with a “low season” Friday start and by limiting exposure on Big Bear Boulevard.  “It may be hard to predict the total impact to our local economy” said Events Office Manager, Rick Bates, but he went on to say, “worldwide TV coverage is easy to measure because it is big, very big”.  Few who witnessed past TV coverage can dispute that the race cameras love Big Bear.  The exact race route and alternative traffic routes will be disclosed once finalized.   AEG, the race promoter, is no stranger to big events as they have a hand in managing the Staples Center, LA Live, The Los Angeles Kings, aspects of the Lakers and other sports franchises around the world.   The Big Bear Local Organizing committee, along with the City of Big Bear Lake, will work closely with the community to increase awareness and cooperation.  Friday, May 15th, normally an uneventful day for most who live in Big Bear, should prove to be much less uneventful in 2015.