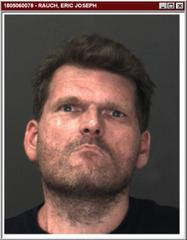 Big Bear, CA – On Tuesday, May 29, Detectives from the Big Bear Sheriff’s Station arrested Eric Rauch, a 44-year-old resident of Big Bear City, for soliciting minors for sale as prostitutes and other related charges. Through investigation, it was determined that Rauch was targeting underage girls on social media for purposes of meeting them, having sex with them, and offering them for sale for sexual acts with others.

Deputies conducted a sting operation wherein Rauch believed he would be meeting with two girls ages 15 and 16 after having communicated with them online. When Rauch arrived at the designated location to meet the fictitious juveniles, Rauch was taken into custody by Detectives without incident.

Eric Rauch was booked on felony charges of pandering a minor child and sending harmful matter with the intent to seduce a minor, as well as a misdemeanor charge of arranging a meeting with a minor. Rauch remains in custody at West Valley Detention Center in lieu of $150,000 bail pending an arraignment hearing scheduled for today, May 31.

Detectives believe there could be additional victims and have released the suspects booking photo. Anyone with information is asked to contact the Detective Bureau of the Big Bear Station at (909) 866-0100. Callers wishing to remain anonymous are urged to call the We-Tip Hotline at 1-800-78-CRIME (27463) or leave information on the We-Tip website www.wetip.com.