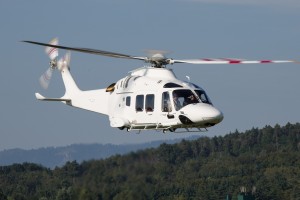 Big Bear City, CA, November 19, 2015 – The Big Bear City Airport was selected by Agusta Westland Helicopters as a high altitude airport to test the AW169 helicopter. The tests they are performing are required to gather data at low speeds (up to 50KTS) around the hover with a CARGO load of one ton connected to the helicopter HOOK.

They recently completed such tests in Thermal for the low altitude envelope and Big Bear is perfect for the Mid/High envelope. They will engage the taxiways for several runs at different aspect angles and will be hover taxiing down the runway to test the aircraft’s performance. They should be finished their testing by Friday November 20.