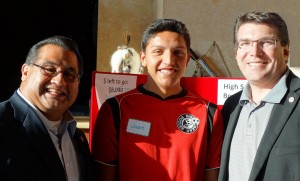 Big Bear, CA, April 14, 2015 – At a reception at Jay and Heather Obernolte’s home on Saturday, April 11, a group of dedicated parents, students, and others saw their dream of a High School boys soccer team become a reality. A few months ago, some folks had the idea to create a soccer team for the boys at BBHS and started the process of raising the $25,000 needed to field a team for the 2015/2016 season. Soon the Lighthouse Project joined the effort and the word started getting out to the community.

Local realtors started the ball rolling with donations totaling $3,000. The Rojas family hosted Taco Day at Sonora Cantina and raised $4,000. The soccer boys held a car wash and made $1,200 and Hacienda Grill raised $4,000 with the sale of ‘soccer balls’. $2,760 was received in mailed donations and Bruce and Kim Voight pledged $2,000 if and when they reached $23,000.

Going into the evening of the reception at the  Obernoltes, there was $8,040 remaining to be raised. As people arrived at the gathering, another $3,000 was raised, leaving just over $5,000 to go. After thanking the community and those present for their generous support, Big Bear Lake Mayor Pro Tem Bill Jahn introduced Assemblyman Jay Obernolte who welcomed guests to his home and stated that he and his wife Heather would donate $1,000 to the campaign and asked Mayor Pro Tem Jahn and Supervisor James Ramos, who was also in attendance, to do the same. Supervisor Ramos said, “Let’s make it $1,500 each in order to reach our goal of $25,000.” Obernolte and Jahn agreed bringing the total to within $540 of their goal. At that moment, Simeon Prophet arrived and stated that REMAX would donate $1,000 putting campaign over the top. By the end of the evening, another $2,970 was raised which means $3,430 dollars will be applied to the boy’s soccer team’s second year expenses which are estimated to be $15,000.

The campaign’s closing celebration event is a buffet dinner and silent auction at Hacienda Grill. All proceeds are being donated to the soccer team by Gus and Nancy Gonzalez and will be applied toward their second year expenses.