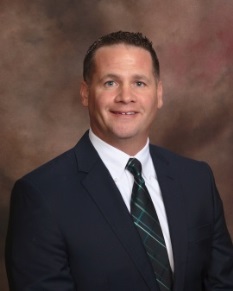 Big Bear City, CA, May 21, 2015 – The Big Bear Airport District Board of Directors has named Dustin Leno, A.A.E., as the new General Manager of the Big Bear City Airport. His first day with the airport was May 11, 2015. In a Special Board of Directors Meeting on April 24, Mr. Leno’s one year employment contract was approved, clearing the way for him to take the helm of the Big Bear City Airport. “We – both the Board and staff – are very excited to welcome Dustin and his wife Summer to the Big Bear Community and Airport. Dustin’s experience and credentials are aligned to what we were searching for in a new General Manager. We were very impressed by Dustin’s straight forward manner and are certain he will contribute enormously to the Big Bear Valley,” said Board President Julie Smith.

Mr. Leno has more than twenty years of experience in the aviation field including airports, flight operations, and Fixed Base Operator (FBO) management. Most recently, he served for seven years as the Airport Operations Supervisor at the San Luis Obispo County Regional Airport, including six years as an Airport Land Use Commissioner for the County of San Luis Obispo. Leno holds a Bachelor of Science degree in Aviation Operations from San Jose State University, is an Accredited Airport Executive (A.A.E.) with the American Association of Airport Executives (AAAE), and holds an Airline Transport Pilot certificate with over 4000 hours logged as a pilot.

In his new position, Mr. Leno will be responsible for the overall administration and financial management of the Big Bear City Airport. This includes day to day operations and maintenance of the airfield, implementation of long range plans and objectives, and interaction with a variety of private and governmental entities and individuals. “I would like to thank the Big Bear Airport District Board for selecting me. It is a great honor and I look forward to working with the Board, airport staff, and especially the community to build upon the successes of the airport and begin a new chapter.” said Leno. “My wife, Summer, and I are looking forward to becoming a part of this wonderful community.”
Dustin Leno 5-21-15 Interview Big Bear City Airport Manager