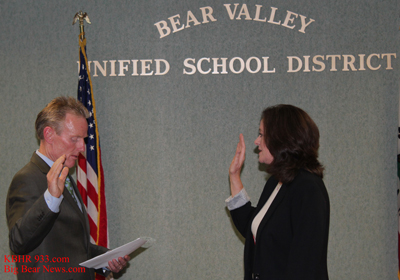 Big Bear Lake, CA, February 11, 2015 – Following Monday’s Special Board Meeting of the Bear Valley Unified School District, the Board appointed new member, Cathy Herrick to fill the seat vacated by Dr. Ken Turney’s sudden passing.  Candidates Herrick and Elaine Tennity were interviewed in a public meeting prior to voting.  Following about an hour of questions and answers, Foulkes commented that although both Herrick and Tennity were qualified to fill the seat, he felt that Herrick set the bar high and that Tennity did not make it over the bar.  Foulkes also added that Herrick would be a better fit for the seat.  The Board voted unanimously to appoint Herrick who was immediately sworn in for a two-year term.  Herrick tells KBHR, “I am very excited for this opportunity to serve on the Bear Valley Unified School District Board.  It is impossible to fill the shoes of Dr. Turney but I am committed to the students of this District and will work hard to do the best job possible”.  This was Herrick’s second interview process for an appointment to the Board following the January 19th Special Board Meeting to fill the vacant seat of Randy Putz.  Putz resigned from the school board after winning a seat on the Big Bear Lake City Council.  Applicants for Putz’s seat included Cathy Herrick and John Goepp.  Goepp had applied and run for election, along with Dr. Stephen Foulkes, in the November 2014 election.  At that time, Foulkes received more votes to win the seat.  In the first appointment, following the interviews for the open seat, the Board felt, in a 4-0 vote, that running for election pushed Goepp in the lead, encouraging Herrick to apply again for the second open seat.