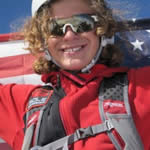 Big Bear, Ca, November 28, 2011, 5:00pm – Team Jordan is gearing up for the last mountain in their quest to climb the seven summits. The team, comprised of 15 year Jordan Romero, dad Paul Romero, and Jordan’s step-mom Karen Lundgren, has already conquered six of the seven summits, and is now getting ready to head to Mount Vincent Massif in Antarctica.  Two years ago the team made two world records when Jordan was the youngest person to summit Mount Everest at the age of 13, and the team was the first family to stand together at the summit of Everest.  In between climbing Mount Everest and gearing up for Antarctica the team has also been checking off states in their quest to climb the highest peak in each of the 50 states.  So far the team has covered most of the upper east coast, and coastal west coast areas.  The Azteca Grill will be hosting a $1 taco fundraiser for the team on Wednesday, November 30th, from 3:00pm to 9:00pm.  The community is invited to support Team Jordan, and to have some tasty tacos in the process.  Attendees will be able to purchase tickets to the Warren Miller movie screening and Team Jordan send off that will take place on Thursday, December 8th.  For more information about Team Jordan go to www.JordanRomero.com.