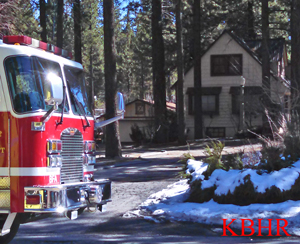 Big Bear Lake, CA, February 26, 2015 – In a press release issued today by the Big Bear Sheriff’s Department, shortly before 11:15 a.m. today, deputies of the Big Bear Sheriff’s Station and fire personnel from Big Bear Fire responded to a reported house on fire in the 42000 block of Fox Farm Road in Big Bear Lake.  Information was received that someone may have been inside the residence at the time of the fire.  Emergency responders arrived on scene within a matter of minutes of being dispatched to the call.  Fire personnel forced entry through the back door of the residence and located an unresponsive female inside the house.  Immediate rescue efforts were made; however, the victim was pronounced deceased at the scene. The fire was contained mostly to the basement area of the house with minor damage to the first floor.  There was extensive smoke damage throughout the residence.  Firefighters worked quickly and efficiently to extinguish the fire.  At this time, the Coroner’s Office is responding to the scene, as well as personnel from the Sheriff’s Bomb/Arson Division.  As a matter of protocol, the Bomb/Arson Division of the Sheriff’s Department responds to fires involving fatalities.  The victim’s identification and cause of death will be determined and released by the Coroner’s Office.  Multi-agency response to this incident is a coordinated effort of the Big Bear Sheriff’s Station, Big Bear Fire, the Coroner’s Office and the Bomb/Arson Division of the San Bernardino County Sheriff’s Department.