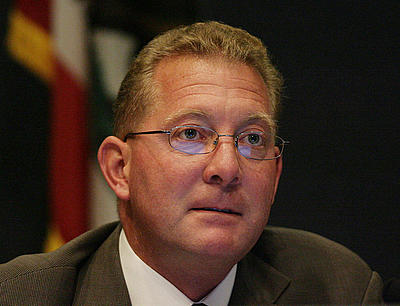 San Bernardino, CA, April 26, 2011, 6:30pm – According to the San Bernardino Sun and other Inland Empire news sources, the state Attorney General’s Office filed criminal charges against San Bernardino County Supervisor Neil Derry earlier today in San Bernardino Superior Court.
According to the Sun, Derry was charged with two felonies and one misdemeanor for alleged reporting violations in connection with a $5,000 contribution he received during his campaign for Supervisor in 2007. The contribution, sources say, was contributed to a political action committee operated by former county Assessor Bill Postmus. The political action committee in turn allegedly contributed money to Derry’s campaign. Derry, who has not been arrested, has an arraignment scheduled for June 9th. Supervisor Derry was not available to KBHR for comment at this time.