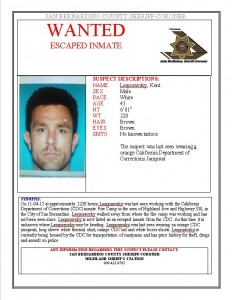 San Bernardino, CA, November 4, 2015 – Sheriff’s dispatch received information that an inmate had walked away from a fire crew at Hwy 330 and E. Highland Avenue in the City of Highland.  The inmate was last seen at approximately 12:30 p.m.  Deputies immediately responded to the area and began searching for Kent Lesporavsky.  Sheriff’s Aviation and search dogs have also responded to the area and are assisting in the search.  The inmate, Kent Lesporavsky is described as a white male adult, 43 years of age, weighing approximately 220 pounds, brown hair, brown eyes and was last seen wearing an orange CDC jumpsuit, long sleeve white thermal shirt.  Lesporavsky is currently being housed by the CDC for transportation of marijuana and has prior history for theft, drugs and assault on police .

Anyone with information regarding his whereabouts is urged to immediately call 911 or the Highland Police Department at (909) 425-9793.